A teen singer from Lewisham, SE6 will be part of a singing competition in New York 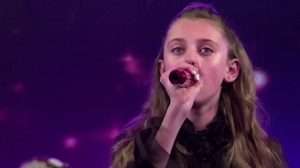 Are you familiar with Alketa Ratkoceri? She is a singer with an angelic voice, and at 14 she won the AMOL Festival in Kosovo representing England. She chose to sing a very difficult song by Beyonce – ‘‘Listen’’ which is from the movie Dreamgirls.

She is taking singing lessons for five years now, and her teacher is Michelle Stratford. She says that they get along very well and they have a connection.

Her parents were born and raised in Kosovo but moved to the UK a long time ago. Her father discovered her talent when she was only nine and took her to Michelle to coach her.

The fact that Alketa won the AMOL Festival means that she will fly to New York City in March 2020 to be a part of another singing competition. She says she is excited, and she loves traveling.

She adds that her singing has changed her life completely giving her many opportunities, getting invited to events, festivals, performing on different stages, giving interviews, traveling. But the thing she loves the most about singing is that she is able to express her emotions through a song.

She says that she feels like she is in her own world when she gets on stage and starts singing.

The advice she would give any other young teens that want to succeed with singing is to never give up, don’t listen to people telling you that you can’t do it, and to work very hard every single day.

Her favorite singer is Ariana Grande, and she looks up to her hoping she could be like her one day.