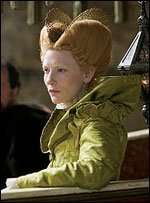 Cate Blanchett reprises her royal role in ‘Elizabeth: The Golden Age,’ which preems in Toronto.

Cate Blanchett starrer “Elizabeth: The Golden Age” will have its world preem at the Toronto Film Festival in September as a Gala presentation, the highest-profile slot at the Canuck fest.
Event on Tuesday announced 32 pics that have already played other festivals, including a slew of Cannes entries. Toronto runs Sept. 6-15.

In “The Golden Age,” Blanchett reprises the role she played in the Oscar-nominated “Elizabeth” and Geoffrey Rush returns to play the queen’s adviser, Sir Francis Walsingham. Shekhar Kapur directed the pic as he did the original.

Pic, which Universal has skedded for an Oct. 12 release, was penned by William Nicholson and Michael Hirst. Tim Bevan, Eric Fellner and Jonathan Cavendish produced.

Joel and Ethan Coen’s “No Country for Old Men,” which world preemed in competition at Cannes, will have its North American premiere at the Toronto fest. The Miramax release is set to make its U.S. bow just after Toronto at the New York Film Festival. Carlos Reygadas’ “Silent Light” (which tied for the jury prize at Cannes) is also in the lineup.