The Queens Market in Newham, E16 will receive a renovation 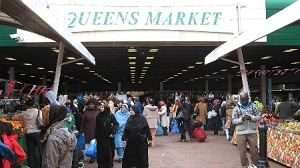 Queen’s Market, as we all know, is one of London’s most famous markets. It will be upgraded very soon.
The extra funding from the GLA – £25,000, will be used for the improvement of the market. This was decided by the Newham Council, E16.
The council wants everyone to be involved so they are asking the public what the money should be spent on.
The mayor of Newham, Rokhsana Fiaz, says that this is a celebration of the history and heritage that Newham – the Queen’s Market has been started over 100 years.
Queen’s Market started in Green Street in the early 1900s.
Trader Muhammad Shahid Nazir became a sensation in 2012 with the song he made (‘£1 Fish Man’) that went viral. He even signed a record deal.